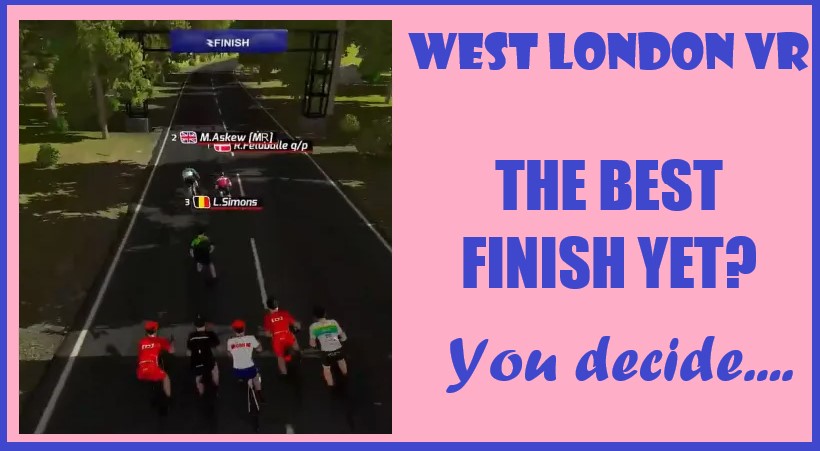 Watch the videos, but if you are really short of time, don’t miss the last 2.3km … a tribute to the riders involved it was awesome.

West London VR races are covered and streamed by ZMS, with full commentary and graphics. ZMS gets into the action across the race and features different riders across the spectrum, including our Ladies League Heroines. As Race 5.1 neared the final two kilometres we saw a select bunch on course for the anticipated bunch sprint on the flat course. But then the script was thrown away … we don’t know who should get the accolades here, but there are so many heroic performances we think all of the riders involved should take a bow.

Whether or not this is the best finish yet is probably down to personal taste, who can forget Carlos Cela in Ruislip, or Jan Deca at Hillingdon. Ned Bowen has had numerous classy sprints, but where we think this one stands out, is the sheer number of contributors to this particular thriller.

With 2.3km to go it looked like a bunch sprint would ensue. But then a brilliantly co-ordinated attack by the Pocomotion Team fractured the field. Many riders were caught out by it and it was simply a masterclass in e-racing. Kudos to Pocomotion here, excellent team riding.

Unfortunately for Pocomotion though a few riders were able to cling on, including Rasmus Feldballe who really was the most aggressive rider of te race and would have been a worthy winner …. but watch what happens on the official ZMS Stream:

Once you’ve seen the finish, it is now well worth watching it from Ned Bowen’s stream. Ned was left out and had to claw his way back, just watch how he does it and it gives you further insight into the brilliant Pocomotion move and how some of the top riders made such a fantastic recovery.

And finally, have a look at it from Tom Gakes’ perspective:

You decide how exciting it was, there may have been better individual performances, but have so many contributed to such a complex and intriguing finish? Well done Miles Askew, we got this far into this post before even mentioning the winner!