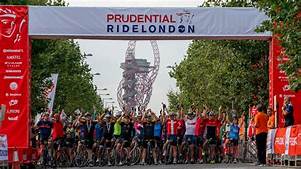 There are quite a few of the West London Cycling faithful who are signed up for the Ride London-Essex Sportive on Sunday 29th May, so we thought we’d do a preview. To be clear, we are not seeking to replicate what is already in your Rider Pack, you should still read that of course.

We have set up a separate Whatsapp Group for those that we know are doing it, so that we can all chat immediately afterwards and are planning a Curry Evening at 7.30pm in Ruislip for the chance to properly share our memories (as no doubt your nearest and dearest will probably not fully appreciate your exciting tales.

This article will focus on the 100 mile route, but there are 60 mile and 30 mile routes as well as the Central London Free Cycle where families can cycle closed roads in Central London between 10am and 3pm. The shorter routes cover part of the longer course.

WHAT TYPE OF EVENT IS IT REALLY?

Anyone who has done closed road Sportives / Gran Fondos abroad will be aware that the front end of the event is usually a race for those in the first starting pens, whilst a personal challenge for riders not amongst those first few elite starting pens. In the UK, probably for insurance reasons, this is discouraged and the organisers of Ride London have been at pains to point out that this event isn’t a race. We have no doubt that there are all sorts of obstacles to get through with local councils too with Cancel Culture being the easy option and we all acknowledge that most of these types of events are not races (although check out the Tour of Cambridgeshire).

Whatever you think about the perceived British negativity towards the racing side of this, it remains a personal challenge for most riders taking part and, arguably, falls into two broad categories, those challenging themselves to a long distance and those challenging themselves to a fast time by taking advantage of the closed roads and forming fast groups (peletons). We are not saying that there aren’t others who don’t care too much about those two broad goals, such as charity riders for example, but we suspect that most have a challenge in mind, not least because it is a very expensive bike ride otherwise! Nevertheless, if you are just looking to ride around and enjoy the atmosphere, we hope you have a great ride … we may have underestimated how many are doing this just for the experience and, of course, if you are not from the London area this is a great way of cycling in the area. But we still suspect that a lot of you will still have an eye on either distance or speed, maybe both!

There has been controversy in the last few weeks, firstly when it was revealed that riders at the front would be limited to 22mph by a Safety Car (later retracted) and then the announcement that the timing would stop when riders were in an official feed station. There will be differing views about the latter measure, but the first one was fundamentally flawed in its concept and was, rightly, withdrawn.

You may not fully agree with the sentiments above and we are not backing them with data, but this event has been running a few years and so our perceptions are based on anecdotal evidence. If you are going for speed, do not put yourself in a ‘zone’ mentally, you must be aware of the other riders around you. You still need to look behind before changing your line, crashes at speed hurt … physically and financially.

So if you are looking for a fast time, if you can get in fast groups then it is possible to get an amazing time. The fact that you don’t need to slow at junctions and the drafting effect can, potentially, really enhance your average speed. But you need to be aware of what riding in groups is like, regular club riders will probably be OK, but not everyone is used to group riding, so be alert.

If you are taking on more distance than you are used to, we recommend that you don’t get swept up in the speed of it all at the start, ride comfortably from the outset to have a chance. But the most important thing is to keep eating and drinking, refuel and rehydrate throughout … do that and you should be fine.

What is really important to understand is that if you are not fast, KEEP TO THE LEFT, so that faster riders can get by. In fact, even if you are fast, there will be faster riders than you, so don’t hog the outside lane. This is really important and stops nasty accidents, If you are not used to riding in groups take extra care, look behind before steering left or right, this is a major danger, there are likely to be a lot of riders who are inexperienced and don’t look before manoeuvring , so be aware of other riders’ behaviour when passing too.

Some of the route will be familiar if you’ve done the Dunwich Dynamo, at least as far as Ongar through Epping Forest, but it is not identical. This section is a gentle drag, but should not trouble most riders. There’s another drag up out of Chemlsford at around 65 miles, and two lumps just inside the M25. But none of these will compare to the Surrey lumps of the old route before this move to Essex.

We don’t take the view that this event requires anything extra that you would not have taken out on a Sunday ride, but obviously, inner tubes, tyre levers and a multi tool are the bare minimum. Energy bars and gels are a good idea too. What you wear may depend on the weather on the day but if you have an early start it could be cold in the pen. A rain jacket may be a good idea, if not for the rain but as a layer to wear whilst in the starting pen. One thing you sometimes see, especially abroad, is people wearing disposable decorators’ overalls in the pens and then putting them in the bin just before the start.

We doubt many sportive riders will bother with mudguards, so expect a splattering from people’s rear wheels if it is wet.

It will be interesting to see how people are funnelled out at the finish, certainly through Tooley Street but we are not sure how they will manage London Bridge as, we suspect, thousands will want to cross back north of the river.

We are contemplating riding back to Aldgate or Liverpool Street and getting the Metropolitan Line back to Harrow/Ruislip/Uxbridge (but see below). You are allowed to take your bike on the Metropolitan Line, District Line, Circle Line and Hammersmith and City Line in central London.

HOWEVER THERE IS A FOOTBALL MATCH AT WEMBLEY KICKING OFF AT 4.30pm SO BEYOND 2pm THE TRAINS MAY BE A LITTLE OVERCROWDED TO TAKE BIKES ON.

If you are looking to come back west on the Central Line, we suggest getting the Hammersmith and City or Circle Line to Wood Lane, then walking across to White City Station which is from where bikes are permitted on the Central Line going westwards.

Another Alternative is to get the Hammersmith and City or Circle Line to Paddington and heading Westwards to Ealing, Southall, Hayes, West Drayton etc. Remember there is a branch line up to Greenford too.

Another option may be to get the District Line to Hammersmith or Acton, maybe even Ealing Broadway and, perhaps, linking it with a transfer to the Piccadilly Line towards Uxbridge or Heathrow.

Getting there is going to have its challenges, some people have booked parking, some will get lifts at least some of the way and cycle there……we don’t have an easy solution we’re afraid.