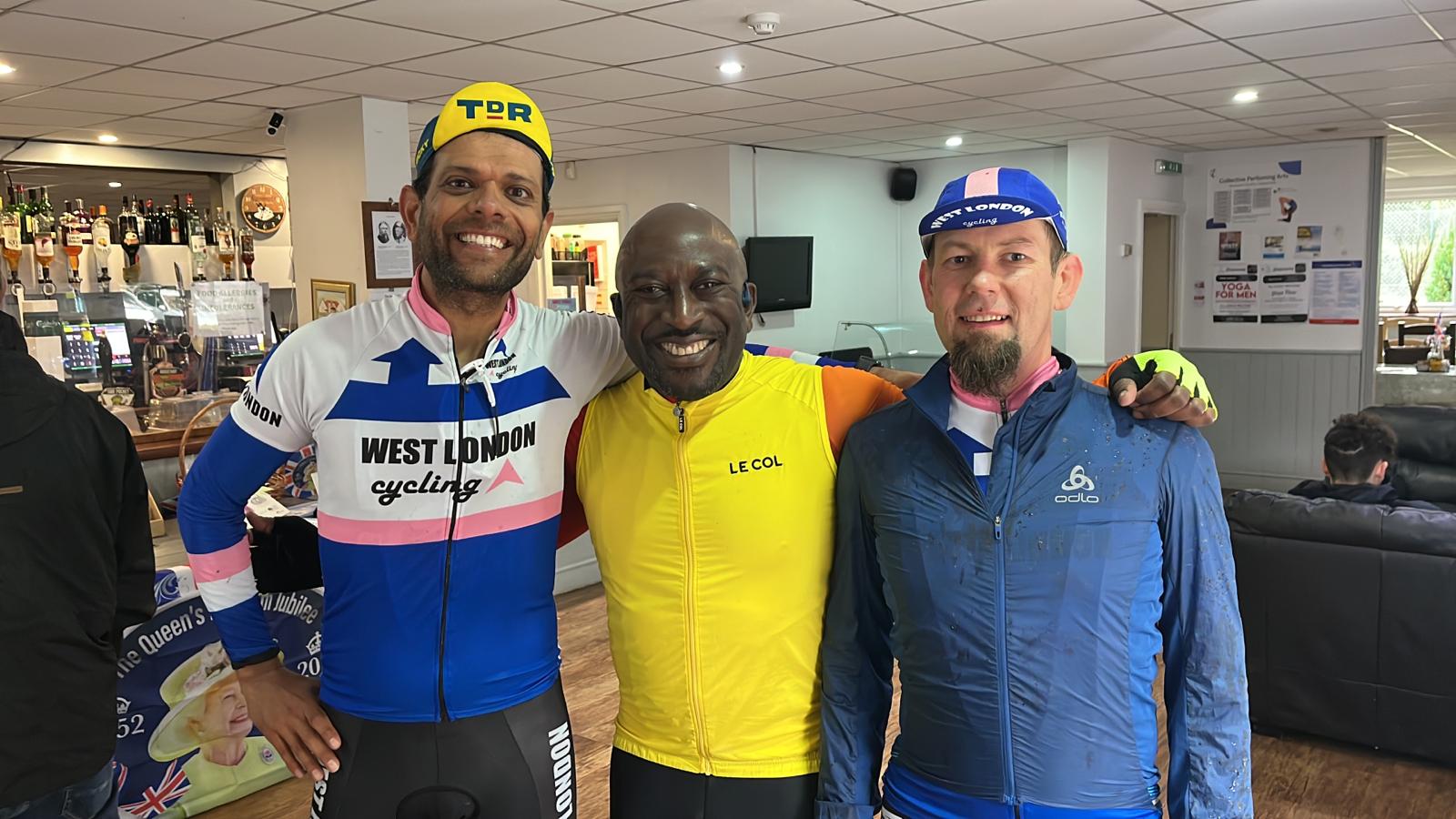 Three expeditions over four days with West London Cycling in action across swathes of the realm over the four day Queen’s Jubilee celebrations.

Thursday saw sunshine and a great ride down to Brighton, with 25% of the riders returning back to London by bike too. An impromptu stop near Effingham for Surrey’s new cycling cafe The Queen Stage, added to the fun. Ian Nguru swam in the sea at Brighton whilst others paddled, but everyone enjoyed Fish and Chips on the beach.

Saturday saw Bryn Evans and Dave Morrison brought down to earth as they battled 90km of strong headwinds and a few steep gradients in the Vale of Evesham 300km Audax from Aylesbury, but they fired on to the bitter end in a tough day’s cycling. The forecast had been for monsoon like conditions over the latter days of the four day holiday and rain overnight on Saturday did not quell the enthusiasm of our West London Cyclonauts who turned out in decent numbers for the Flaunden Flaunt Sunday Club Ride with coffee at Blackwells in Chipperfield. The great news was that it actually didn’t rain, so a wet, wet, wet no-show.

Both Leons (Evans and Binding) rode both the Thursday and Sunday rides, and we have still yet to get all three Tony’s out on the same ride on the same day, but Tony C and Tony McEvoy did Thursday and Tony Davis did Sunday, so three on a weekend, nearly did it! … so the Leons are this week’s kings with four rides between them…. Nevertheless, Tony, Toni Toné’s smash song, ‘It Never Rains in Southern California’ will be incorporated into this article though, because across three rides we got no rain despite the forecasts. It never rains in Southern England doesn’t really work as a song title, hmmmm ….. maybe the only constant is Queen Elizabeth the Second’s ‘Reign’?

This weekend coming (11th & 12th June), we have a 200km return trip out to the Tunbridge Cycling Festival run by our good friends Southborough District Wheelers and on Sunday we have another new ride, the Tea Shack Tipple with coffee at the Tea Shack in Maple Cross (as seen in the Tour de Ricky). It also has a brewery …..