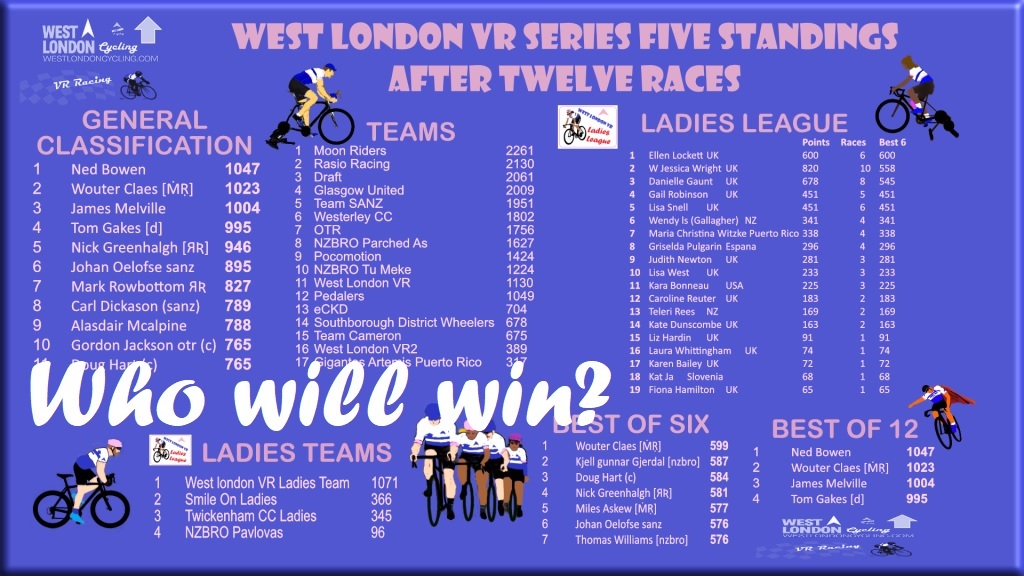 With the traditional 11 laps of Hillingdon Circuit as the climax of a West London VR Series, everyone gets to be in the thick of the action as you’ll never be more than 1400m from the leaders!

But who will lead?

There was a major upset in Race 5.12 when Wouter Claes had a Techanical and finished way down the pack. This let Ned Bowen slip into the hotseat with just one race to go. Ned has a 24 point advantage over Wouter, so Wouter needs to beat Ned by 24 places to win. In the event of a tie, there would be a tie breaker. James Melville, Tom Gakes, Nick Greenhalgh and Johan Oelofse will also all have an eye on third spot. Trophies go to the top three over the series.

Ellen Lockett has already won the Ladies League but Jesica Wright, Danielle Gaunt and Gail Robinson will all be vying for the remaining podium places. Trophies go to the top three over the series.

Moon Riders are on course to beat Rasio racing and Team Draft in the Teams Classification, but you never know! Trophies go to members of the winning team.

West London VR Ladies Team have won the Ladies League and will be receiving their trophies soon.

Despite last week’s unfortunate Techanical, Wouter Claes will hope to keep hold of his top place in the Best of Six contest where a rider’s best six results count. There is a trophy for the winner.

However, in the Dirty Dozen classification (Best of Twelve) Ned Bowen looks destined to cling on to top spot. There is a trophy for the winner.

We will find out what happens on Wednesday 28th September (7.30pm start UK Time)!