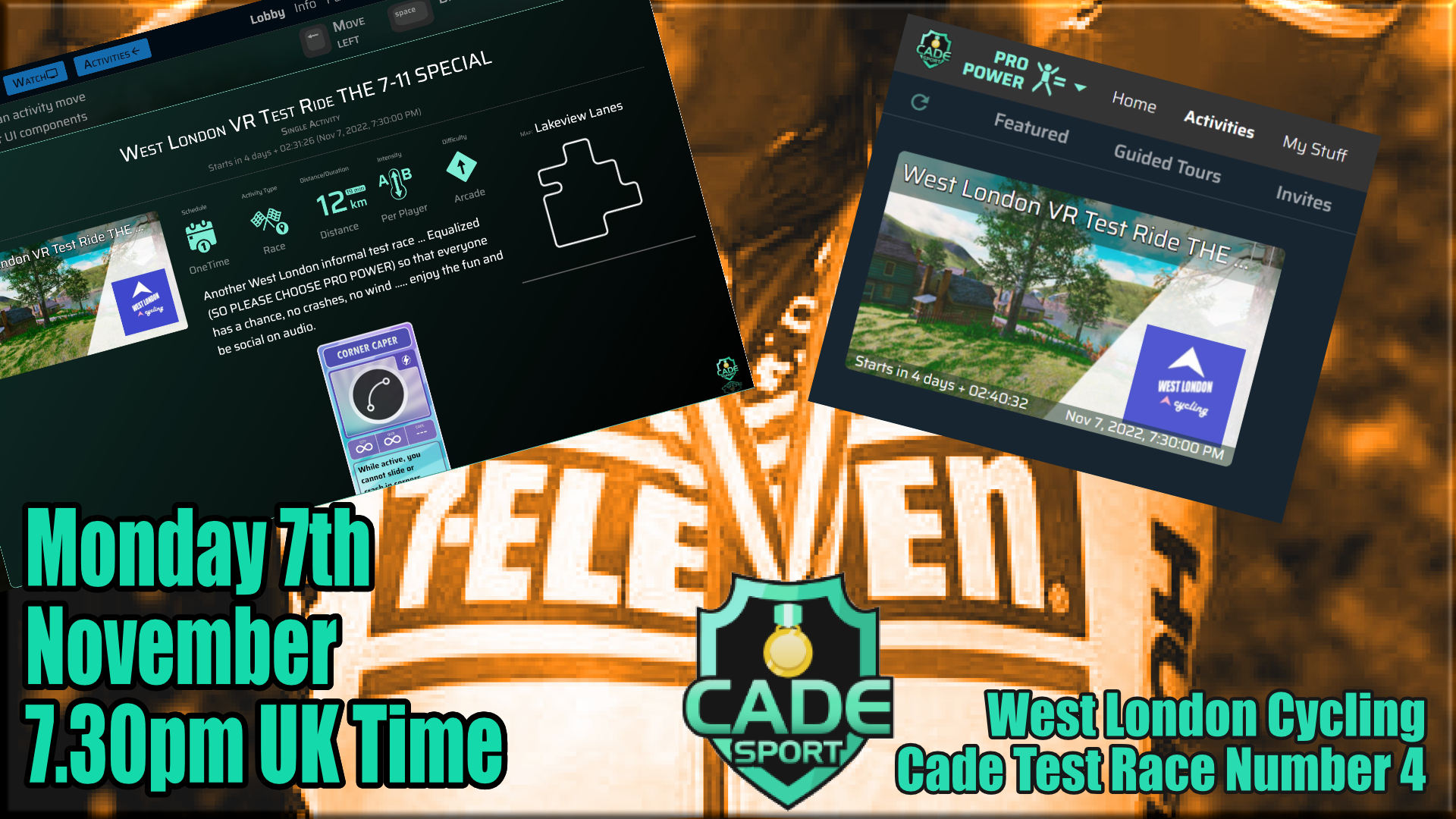 We are getting quite excited about Cade, the early test rides are going sweetly, so why not pop along and join in these informal races we organise on Monday evenings at 7.30pm UK Time on Cade? They are informal, as the main objective is getting better and finding any glitches, be a pioneer, be an early adopter, be a trend setter, ahead of the curve and have the kudos of having been there in the early days …. join the kool skool and raid Cade!

This Monday, is the 7th November, 7-11 for us, but maybe 11-7 if you live west of the Atlantic Ocean. So we’ve called it the 7-Eleven special, giving a nod to the great American cycling team of yesteryear. But it’s really all about you, and getting the experience of this exciting new platform. Currently it’s free, so get in now! What are you waiting for?

This week’s race is on the Lakeland Views Course, 5 laps totalling around 12km. Why not warm up on one of Cade’s other great ‘Maps’ before the race?

This time we are trying out an Equalizer Race, where all riders have the same power and effort will determine. This has the potential to be very interesting and exciting, we’ll find out on Monday, be sure to join us. BE SURE TO SET YOUR POWER TO PRO POWER WHEN YOU JOIN THE RACE

Cade is at the Beta Test stage, so will get even better, but it already looks set to overtake Zwift and RGT for features, yet all in one package and half the price of Zwift. Not quite perfect yet perhaps, but why not ride it whilst it’s free? It will be around £65 per year once they start charging. We are giving feedback to Cade and are finding that they are already dealing with most things we cite, or are very responsive.

To join the ride on Monday at 7.30pm, sign up for Cade now (It is currently free to test). Our test race is 12km long, set in in countryside and we’ve set it up with no wind this week. Riders will be uncrashable (ie you can’t crash during the race) and you should SET YOUR POWER TO PRO POWER WHEN JOINING THE RACE to equalise everyone’s power

In the ‘Game UI’ settings we recommend that you switch off scoreboard and switch on the lap distance option. Pro Power is what we will be riding in this particular race and there is a three minute warm up just before the start that delivers you to the start on time. You can set the difficulty low in the warm up. The warm up is to take away the idleness of sitting in the pen before the start. When you join on Monday evening, you need to go into the ‘LOBBY’ before the race.