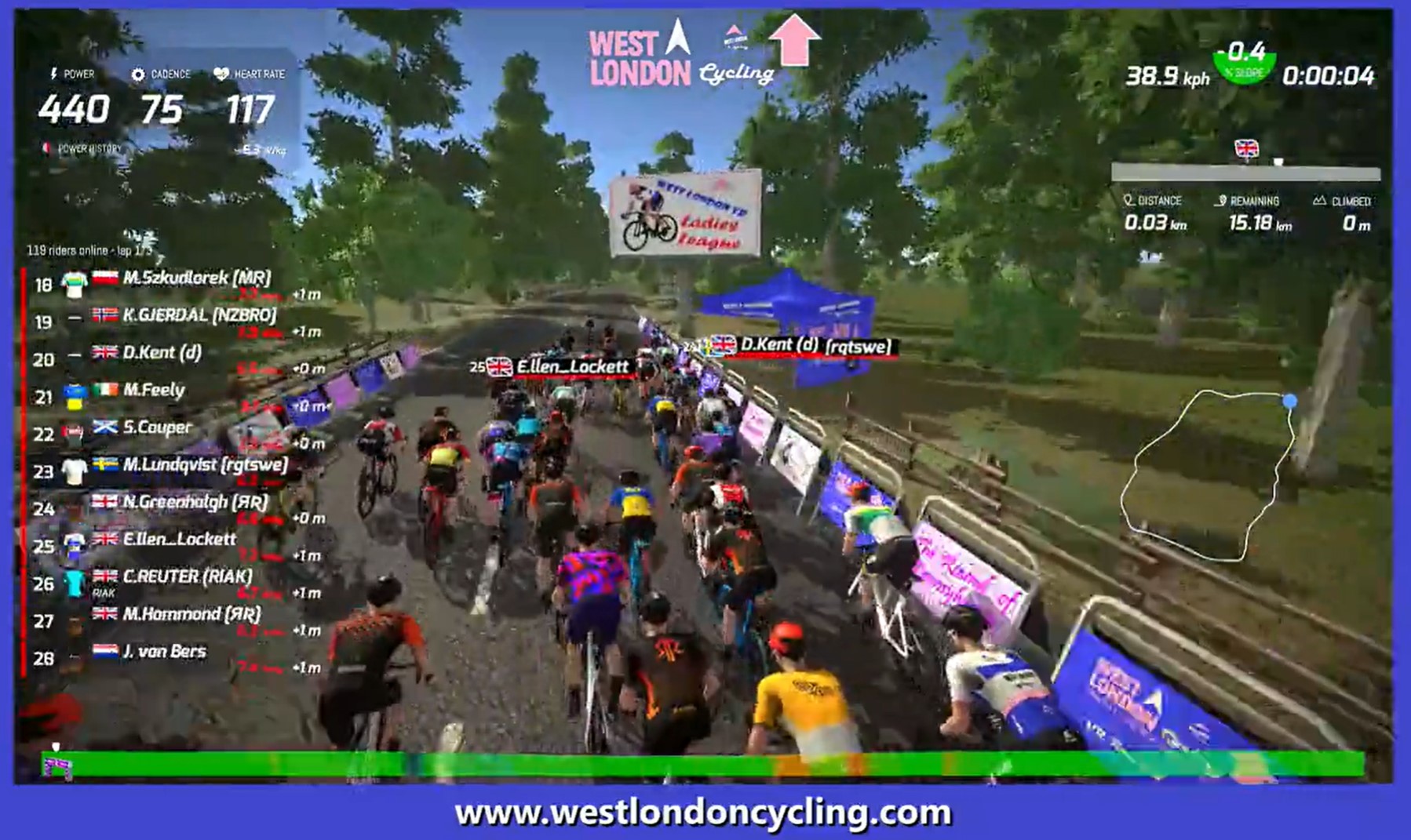 There were 159 entries, 119 starters and 111 finishers, and the whirr of Smart Trainers around the world was, no doubt, punctuated with gasps for air and the occasional rhythmic sound of keyboards being tapped. Another West London VR Race had burst across the starting line and both battles and banter amongst the assembled bretheren ensued. Welcome to community e-Racing.

The Round of Pennsylvania course has produced some great results over the years, the climb up to the finish straight on each of the three laps allowing attacks and draining energy for the sprint finish. This course was back by public demand. Hitherto the finish line hasn’t always been visible until late, which has caught out a few riders but now with Wahoo RGT’s fences with banners along the side, there is some degree of warning, so most riders were primed for a bunch sprint finish..

But Rasmus Feldeballe had other ideas. Rasmus, who rides foe eCKD, lights up races and characteristically surged towards the end of the race in search of a glorious solo victory, only for Rasio Racing’s Matt Hzammond to put in a stunning sprint and take the win. But the action wasn’t over Nick Greenhalgh won a tight group sprint for third place, adding to the drama. The video is worth watching (see link above), courtest of Sweatflix.

The controversial and dramatic upset of the day was Wouter Claes suffering a short dropout as the race thundered towards its climax, ultimately costing him several places but the warrior in him saw him fight for every place right up until the line … entertaining stuff.

Meanwhile, Ladies League champion Ellen Locket hasn’t been able to ride recently due to some surgery on her hand. Freed from her medical banishment she was clearly raring to go and won the Ladies Race with aplomb, but just look how close Anastasiia Afanasieva was, and Anastasiia looks like being a serious contender across this series. Ellen has only ridden one race, but we suspect we’ll see her climbing the rankings as she settles back in. Meanwhile, the leading lady before the race, Judith Newton, was unable to ride for domestic reasons, but remember that with the best six races counting, all of the girls can miss a race or two…. Judith will be back!

With Judith sidelined, Caroline Reuter took the opportunity to claim top spot in the Ladies League Classification, and her team RIAK, consolidatted their position in the Ladies Teams Classification. We think there may be more twists in this plot though, if Judith and Ellen can both ride regularly and pick up more points for West London Ladies..

With Rasio’s Mat Hammond and Nick Greenhalgh both in podium positions, Rasio Racing consolidated their position in top spot of the Teams Classification but NoPinz R3R and Moon Riders are closely stalking them…. it ain’t over until race 13 spins.

…and finally….. sadly, one rider appears to have their gender set incorrectly and, initially, the results suggested a man won the Ladies League race. We spent around one and a half hours looking for a fix as it messed up the Ladies League points and standings. Sadly, we reached a point where it was clear that the only way to rectify the Ladies League would be to disqualify the male rider. We really didn’t want to do this, but we had no choice in the end. We have contacted the rider and alerted them to their settings error, and hopefully they will be able to sort this out before the next race. We really do regret having to have had to do this, and we tried for some time to find an alternative fix with this being a last resort.