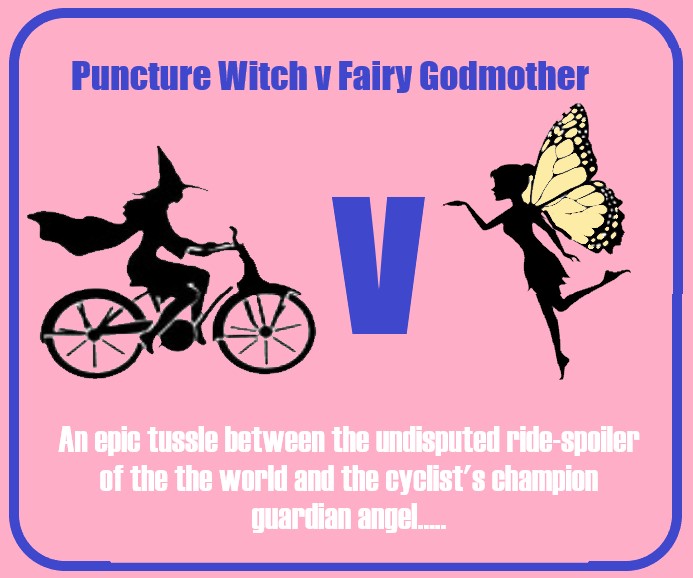 A Heavyweight duel to contest supremacy between the two sides of the coin that is Lady Luck…..

The battle between good and evil took on an epic confrontation between the Puncture Witch and our Fairy Godmother on the West London VR Audax Ride to test Liam Fitzpatrick’s new 203km Tour de Ricky route and the victim was Gautam (GT), unwittingly being the target of this tussle between good and bad.

ROUND 1: Gautam has a soft tyre on the way to the start as the Puncture Witch had started weaving evil spells at 7am in the morning. Possibly caught unawares by this early onslaught the only response from the Fairy Godmother was to ensure that the re-inflated, tubeless tyre made it to the start in Ricky.

ROUND 2: Again the Puncture Witch gets in early with a puncture but it seals.

ROUND 3: The Fairy Godmother gets in first and provides a track pump at the excellent Stag in Mentmore.

ROUND 4: Unfazed the Puncture Witch responds by ensuring that the air pressure pushes out the plugging sealant. The Fairy Godmother responds in kind with an anchovy/worm plug inserted by Dave

ROUND 6: The Puncture Witch deviates with some devious underhand and unconventional tactics by making GT’s cleat come off and all but one of the bolts going missing. It was going to be difficult but just as the referee was about to step in, GT took a bolt out of the other shoe so that there were two bolts in each cleat. Fairy Godmother was clearly on the ropes here and the referee was looking to stop the contest, but just when all looked lost the Fairy Godmother produced one of the greatest counter-punches ever seen…..Sam found a bike shop about 300 metres away on Google tucked away out of sight on a small industrial site. In a groggy state the cyclists found their way to the wonderful Fulcycle on Wheatley Business Centre – http://fulcycle.com . Excellent service and new cleats professionally fitted, the Puncture Witch was stunned and looked to be in trouble with her attempts to ruin the day. We recommend Fulcycle on this experience, excellent service and a friendly welcome, specialists in repairs and bike fits.

ROUND 7: A bit of footwork around the ring but, without any major punches, Puncture Witch did land a few body punches to try and spoil the day. Whilst stopped briefly between two parked cars, such that any motorist had to pull out to go around the parked cars and us, Mr G Obshite of Smallville decided to pull alongside us and tell us we were blocking the road (we weren’t) …much to the embarrassment of his daughter. Fairy Godmother responded by giving us the opportunity to point out to Mr Obshite that whilst he was parked in the opposite carriageway abusing us, he was blocking a motorist trying to come the other way, so he scurried away. Just as it looked as though Fairy Godmother had won a round we took a wrong turn and suddenly pausing to check the route, and to be fair, in the road albeit that there was no traffic … a front door swung open and who should walk out? Mr Obshite pointing out that we were blocking the road…. a bitter pill to swallow!

ROUND 8: The Puncture Witch tries to put GT onto the tarmac with the faintest of touched wheels but as he tumbles the Fairy Godmother swoops down to guide his landing onto the soft grass verge. Despite a bruised elbow, there was no bike damage and GT was up ready to go on following a mandatory standing count; the contest continued with the Fairy Godmother still holding her own

ROUND 9: An epic round with the Puncture Witch attacking GT’s other tyre as a classic one-two combination causes a gash on the side-wall and another hole elsewhere on the tyre, the Fairy Godmother is on the canvas and the referee is about to start counting, but after a struggle GT gets the tyre off and inserts an inner tube into the tubeless tyre, But the counter from the Fairy Godmother has not landed a solid punch and the Puncture Witch counters with the realisation that the inner tube valve is too small for GT’s deep rimmed back wheel, stunned and wobbling Fairy Godmother suddenly counters and a 60mm valve is found amongst the other riders.

ROUND 10: Fairy Godmother is looking battered but Puncture Witch cannot land that killer blow. Nevertheless Puncture Witch reverts back to GT’s front wheel and causes yet another puncture but it doesn’t look serious and a bit of air carries GT through.

ROUND 11: GT reaches Turville Heath, the cafe is closed but his tyres are now succumbing to the repeated body punches endured. The light is starting to fade, there is no phone signal and all looks doomed. Fairy Godmother is groggy and on the canvas, the ride looks ruined and there is no clear way to get home. The referee has counted to nine and is about to declare Puncture Witch the winner when Fairy Godmother lands the greatest knock-out punch of all time. …..

From nowhere, a bloke steps out from the trees dressed in cycling gear at 5pm in the middle of nowhere and asks what the problem is? He and his wife have been for a ride and are parked 20 metres away, unusually because their usual place was full, and here’s the unbelievable bit….. they live in Ruislip about a mile away from GT, and have room in their car for GT and his bike so dropped him at his house in West London! What is the probability of that?

Step up Marc and Fran Swallow …. this week’s West London Cycling Heroes of the Week….. how kind and thoughtful, we all salute you, absolute stars!

The banter through all of this was top notch, it was fun despite the travails and probably one of the most social and entertaining of rides this year. Well done all, you were great company, it really was a fun day. Great route from Liam too.

Liam has suggested that the 2021 award for the luckiest and unluckiest person should both go to GT.

….and we should add that GT, Carl and Dave all turned out at 9am for the West London Cycling Sunday ride too!