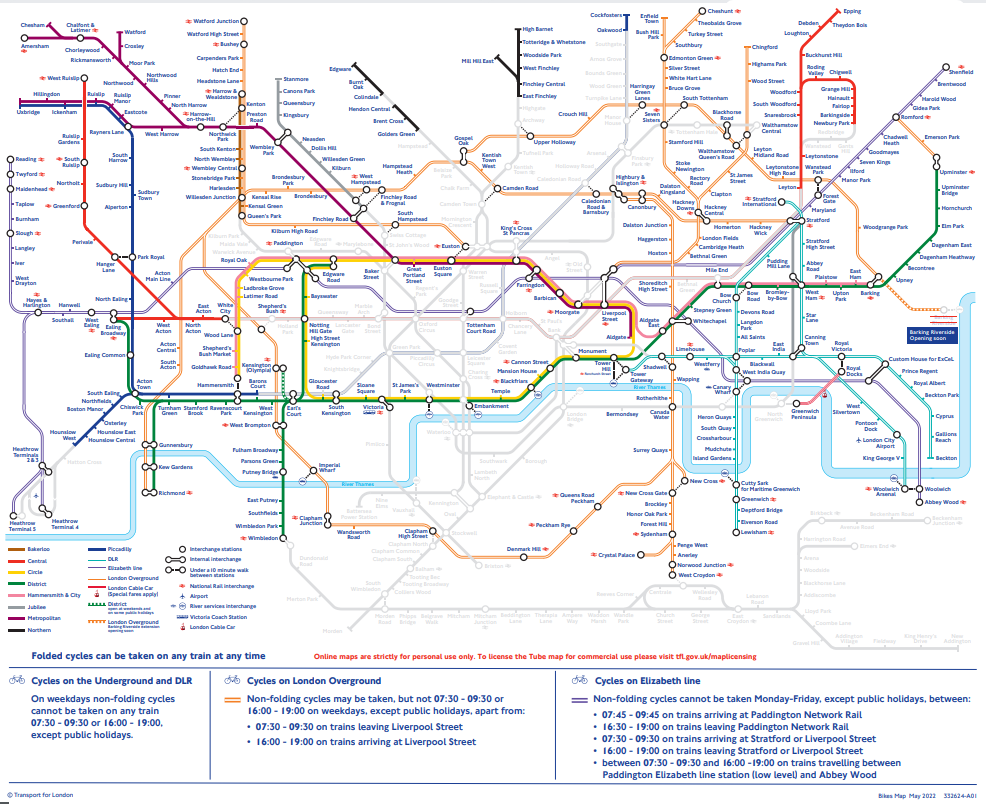 When and where can you take your bike on the tube?

The short answer is, unless it is a folding bike (which are allowed anywhere on the tube at any time) you can only take your bike on London Underground trains outside the rush-hour and not on the deep-section tunnels (although the new Elizabeth Line does allow bikes in tunnelled sections). see the map above.

This means that the times you can go on the tube with a bike are:

But you cannot take them on deep section lines at any time in the tunnels (apart from the Elizabeth Line). You can, however, take them on the overground sections of deep tunnelled lines. Essentially, the deep section tubes are the smaller trains in round tunnels built after World War One, such as the Central Line, Northern, Jubilee Line, Victoria Line and Piccadilly Line (apart from the Elizabeth Line). The Older ‘Cut and Cover’ Lines such as the Metropolitan Line, Circle Line, District Line and Hammersmith and City Line will accept bikes in tunnelled sections.

So, in practice, what does that mean for us?

If you wanted to travel out to Ruislip for our Sunday Rides from the Polish War Memorial you could pick up the Piccadilly Line at Barons Court or Hammersmith and travel out to Ruislip. Maybe get the Central Line from White City to Ruislip Gardens or the Metropolitan Line from Baker Street and beyond. The new Elizabeth Line does allow more travel across London and changes at Paddington or Farringdon/ Liverpool Street on to the Metropolitan Line are now an option.

If you are wondering why the deep section tunnels (apart from the Elizabeth Line) are excluded, there are three compelling reasons: